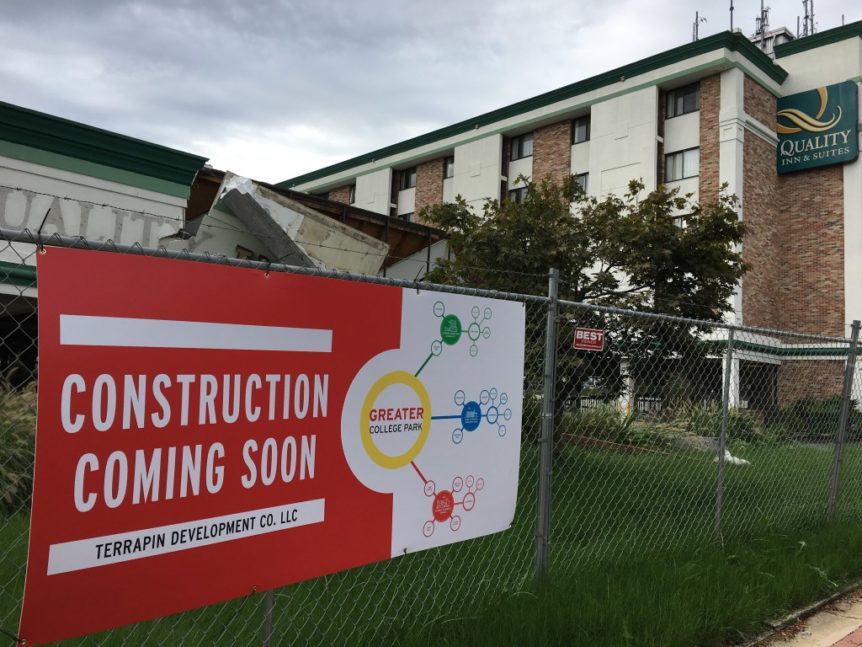 Developers are moving ahead with a dramatic plan on the former site of the Quality Inn and Plato’s Diner in College Park.

The Bozzuto Group, which is working on the project, recently signed agreements with the city necessary to keep the $140 million project on track.

Aimed at professionals instead of students, the project would include 400 apartments renting at a market rate of $2,300 a month.

It would also include about 73,000 square feet of retail — a little less than half the retail space in the Riverdale Park Station development.

Developers have said they want the site to be similar to the Monroe Street Market in Brookland, which features apartments alongside a Barnes and Noble, Busboys and Poets, Starbucks and other restaurants. They hope to land a grocery store as an anchor tenant.

If successful, the development would go a long way toward making College Park more of a “year-round city,” instead of a college town that essentially shuts down during the summer.

But one issue is exactly what kind of retail would work. As we’ve noted before, there aren’t many shops in Route 1’s new retail developments, just grocery stores, drug stores, 7-Elevens, fitness studios, hair and nail salons and a growing number of fast-casual restaurants — all businesses that are “Amazon-proof.”

Bozzuto addressed a similar problem at Monroe Street Market with a Barnes and Noble and a bike shop with a coffee bar inside — two options that would appeal to students at nearby Catholic University — as well as a row of artists studios. It may need to be just as creative to make the College Park site work.